As part of the southwestern extension of the bikes this autumn/winter, a new docking station is under construction on Grant Road, one of the two exits from Clapham Junction rail station. And it's huge. About 80 docking plates are already in the road surface, and contractors are continuing along the road installing more. Assuming all are put into use there will be space for almost 150 bikes, a bigger station than Waterloo. Good move? On the whole yes, it will catch commuters coming through Clapham who might work with a 30-minute cycle of the station, just as the Waterloo station has been immensely popular in providing onward journeys from that station. Grant Road is also fairly quiet, so it's a good location to site the station.

Two caveats come to my mind however. Firstly, the dock is nowhere near as close to Clapham Junction as the Waterloo equivalent. On exiting onto Grant Road you can see buses and taxis, but the docks will be a couple of minutes walk to the left. In addition, the main exit from the station is actually at the other end, onto St John's Hill. It's not at all evident to me whether any docks will be put in on that side.

Nonetheless it is a bold decision to create this superdock, and when it opens we'll get a sense of how well it works. A major problem with many of the existing docks is that they are too small and difficult to manage well. It's great to see some lessons being learned in the new generation of docking stations.

Are Boris bikes coming to East Grinstead? Well, this article says they might be, though no timetable has been set. What isn't clear is that 'Boris bikes' is now a shorthand for any bike hire scheme. Like these articles about Birmingham and Southend. So let's find out a bit more before I head off on my bike to East Grinstead looking for the docking station!

Will Boris bikes endanger the residents of the Ashmole Estate in Oval? Shades of Lavender Gardens here - I shan't say more.

As I am writing this, I can hear a radio advert for cycle hire in the background. There are new ads around the streets, and even a new video. Oh, and Manchester wants them too.

New figures from TfL show that almost a million journeys were made by Boris bike in July, and last week's Freecycle was the perfect showcase for thousands of the beautiful blue bikes to take to London's streets. And all over south and west London the newest docking stations are being installed.

So I was surprised to read the rather downbeat assessment of the bikes by Andrew Neather in the Standard, a paper which has in recent months given great encouragement to London cyclists. On striking workers, the farcical Barclays sponsorship deal, and continuing problems with redistribution he is of course spot on. And I have always believed cycle hire needed to be introduced as part of an integrated cycling policy which would put safety as a top priority. Nevertheless, my own view is that Boris bikes have been a great success in getting Londoners onto bikes who would never otherwise have found the means. For many of us, with cramped urban homes, we have no space for our own bikes, and the Boris bike is the perfect easy pick-up and ride. Someone else even does the work if you get a puncture or a broken gear!

At £90 for annual membership, 25p per day is still superb value despite the price rises this year (essential I think to boost revenue). With over 100 new docking stations opening later in the year, membership will also take you further across London. At last we will start to leave behind the main initial problem with the scheme - that it was too timid in its ambition. I hope that further expansion will follow.

If I could wish for one further things from TfL and Serco with regards to the bikes, it would be for greater engagement with users. As the writer of this blog, I find it frustrating how little information is shared by the operators about new developments and future plans. Harnessing the enthusiasm and passion of users will pay back in continued use of the bikes, and new members joining through personal recommendation.

I hope Andrew Neather keeps faith with the humble Boris bike, despite its flaws.

And a final note on docking stations - Queen Street is now back to full operation after the interminable building works which had closed half of it. The much-missed Wansey Street dock remains closed due to the works to secure the Cuming Museum after the fire. It is due back soon though.
Posted by BorisB at 04:23 2 comments:

Boris bike on show at Museum of London 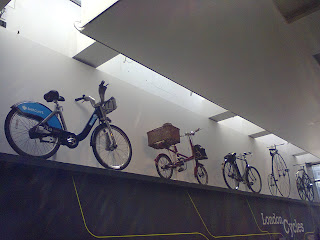 The Museum of London currently has a foyer exhibition on cycling in London, featuring photography, various bikes through the ages, plus a Boris bike which the Museum has acquired for its collections, and graphics of journeys made by cycle hire. If you're in the area, take a look.

It's been a very successful RideLondon weekend, I rode the Freecycle course on Saturday morning on a Boris bike, and there were plenty in evidence all day. Possibly a new daily record for cycle hires?
Posted by BorisB at 08:26 3 comments:

Email ThisBlogThis!Share to TwitterShare to FacebookShare to Pinterest
Labels: Museum of London, RideLondon

Where next for the bikes?

An article which I did not read at the time discusses the reasons behind the uneven coverage of cycle hire docks in central London and its surrounds.

As docking stations are installed in the latest wave of expansion (partly paid for by the Councils, as the article notes) it is worth asking where future expansion should be planned.

The most obvious central London borough needing docks is Southwark. There are a handful in Bermondsey and Elephant, a couple on the northerly borders of Walworth (Wansey Street is currently closed after the Cuming Museum fire), and a few around Borough and London Bridge. In the current expansion, only three new docking stations will be built in Southwark, to serve the busy London Bridge area. As there is poor rail and tube provision, the best candidates for Boris bikes are probably Camberwell and Dulwich to the south and expanding east through Bermondsey into Rotherhithe and the Surrey Quays to the east. Peckham could also be included. These areas are not too hilly, and adjacent to the current central zone. In neighbouring Lambeth, bikes in Brixton and Loughborough Junction would complement this expansion, possibly as far as King's Hospital Campus on the southern slopes of Denmark Hill. It's not as far-fetched as it may sound, Southwark are already looking into it. However, with fears over funding (the bikes are not, it is often pointed out, self-funding as hoped) such an expansion might be wishful thinking.

If we refer to the Mayor's Vision for Cycling the plans for cycle hire are surprisingly unambitious. p26 mentions a superhub at an unspecified rail station, and expanded docking stations along cycle routes. What this document seems to hint at is that bikes need to be placed where they are going to be used. It is quite obvious that some of the docking stations currently installed, such as in the darkest corners of the Westfield shopping centre, or busy and inaccessible areas in the east of Tower Hamlets, are not the best use of money. A more intense presence of bikes in the central areas (close to stations, in the parks, and along superhighways and the future quietways) surely makes sense.

Another area mooted for expansion is the Queen Elizabeth Olympic Park. Frankly, it was daft not to put in bikes there for the Olympics, as it made the expansion out into Tower Hamlets rather pointless. Future expansion into this area I think will depend on the success of the extended CS2 route, and an urgently needed upgrade of the existing section of CS2 so that Boris bikers can safely move between the Park and central London. Considering the limits on funding, perhaps other areas should have a higher priority.

On a recent trip to Paris I was impressed by the Velib scheme. It is large, covering the whole city, docks are easy to find, numerous and large. Simply counting bikes by eye, it is better used than our own facilities. To rival its success, we need more ambition for our Boris bikes, with a co-ordinated approach which puts bikes where they're needed, and can be used with safety.
Posted by BorisB at 02:03 1 comment: