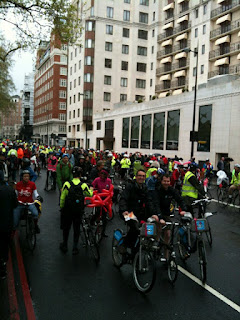 So, 10,000 cyclists did indeed take to London's streets, in the rain, to highlight cycle safety ahead of the mayoral and assembly elections this coming Thursday. And I hope you like my picture of some Boris bikes in the protest - there weren't many of us (maybe because it took more than 30 minutes? maybe because it rained and we're fair-weather folk?) but we were a reminder that cycle hire is now firmly a part of London's cycling culture.

Despite his belated conversion to LCC's 'Go Dutch' strategy, I'm going to agree with Londoners on Bikes that Jenny Jones has the best cycling policies for London. She has consistently supported lower speed limits, priority for pedestrians and cyclists on our streets, and street design which builds in safety for cyclists. What is certain is that cycling is now on the agenda in London politics. Whoever wins on Thursday (realistically Ken or Boris) will need to be held to their promises on cycling.

If you think I've not posted much news recently, it's because there hasn't been much. April has been a wash-out and I've cycled less than usual, I assume I'm not alone. Useage statistics for March (it was sunny then, remember?) show a big boost following the eastern extension, up to just under 40,000 hires each day from about 20,000 during the winter months before the extension.

A few new docks have opened in the Haggerston/Hoxton area, also Mudchute DLR (at last) and the Queen Street extension. Still no change at Monument Street, but it's ready for action.
Posted by BorisB at 22:16 1 comment:

On yer Boris for The Big Ride - 28 April

On the morning of Saturday 28 April a coalition of cycle groups have joined together to organise the Big Ride - a fun cycling day out in London to highlight the need for better and safer facilities for cyclists in London.

Full details are on the LCC website, but you can join a number of feeder rides, and about 10,000 cyclists are expected on the streets of central London, which for one day only will be traffic free.

I'll be at the ride, not only because it'll be great fun, but also I want cycling in London to be available to all Londoners, from children going to school through to older people who could explore London by Boris bike in their retirement. Thank you Boris for the bikes - but whoever the next mayor is needs to deliver streets which we can cycle on, to make cycling an inclusive activity for people of all ages and abilities.

A few weeks ago I wrote about a possible extension to Surbiton. And now it seems Boris has said the same focusing this time on nearby Kingston. Exactly the same caveats apply, and the article itself, if you read past the headline, more or less says 'nice idea but won't happen'.

Despite the beautiful blue bikes, Sustrans gives Mayor Johnson the thumbs down in its assessment of the candidates' transport manifestos.

New docks have opened recently in Limerston Street and Drayton Gardens, extending the zone west along the Fulham Road. Kingsway southbound is also open, as is the long-awaited Abingdon Street Gardens. Strata is fixed at last.

Monument Street has a new dock, not yet active. John Islip Street (Pimlico) has a dock under construction.

I was in Hyde Park yesterday, couldn't get moved for the Boris bikes. Also plenty bikes down on Victoria Embankment, taking advantage of a part-closure for resurfacing.
Posted by BorisB at 23:34 1 comment: