Cyclists in the City has a useful map of the proposed new docks, at this stage, for phase 2 of the cycle hire scheme in the City of London. A useful comparison is the aspirational phase 2 map obtained by the Green Party.

It's unlikely to satisfy demand, especially with extra commuting from the new docks in Tower Hamlets, but at least it's an indication that the City is starting to take cycling seriously.

Around the Royal Parks on a Boris bike - part 1

London is notable for its fabulous green spaces, and probably the best of all are the spacious and relaxing Royal Parks, providing a welcome bit of breathing space in our busy city.

So today I set off on my trusty Boris bike (and with my camera) to see just how accessible and enjoyable the parks are to cyclists. Today, I'm focusing on the most central of the parks, St James's and Green parks. 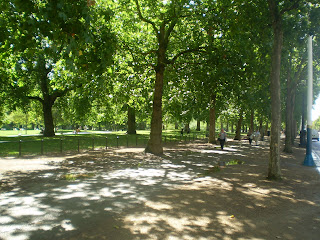 Entering the parks through Admiralty Arch is a real joy, and the Mall is wide enough for cyclists and traffic not to annoy each other. And for those wanting their own space, the north side of the Mall has its own cycle lane (which doubles up as a coach and carpark on certain days, and I have to admit is frequently closed). Cycling is not allowed within St James Park, but the park is small and can be circled quickly by turning onto Birdcage Walk. So, do I stop for a visit to Buckingham Palace, or perhaps a coffee at Inn the Park? Neither, because now the first big problem presents itself - there are no docking stations at all nearby. You can see the problem if you look on a map of docking stations; here, for example. See that big hole around St James's Park? I contacted Royal Parks as long ago as last year to ask what was being done, and was told a proposed docking station on the Mall had been abandoned due to objections. I can only hope the Parks authority revisits this, as some of the nicest parts of London, for tourists and locals alike, just aren't accessible at the moment. 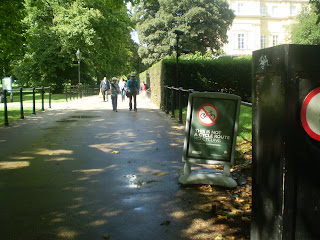 Round into Green Park and a lovely cycle lane takes you up Constitution Hill to, at last, a popular docking station at Wellington Arch. But a second problem now becomes apparent, as there is nowhere else to go by bike in Green Park. The park desparately needs a route round the northern edge, and the wide avenue on the east of the park ought to be opened up to cycling. At present a sign sternly warns against cycling there, despite the fact that it would be an ideal shared space. Green Park tube station (on the north side of the park) is currently being redeveloped, and when finished will include cycle hire docks. But where exactly would one go on a bike from there? The only option, unless new routes open up in Green Park, is to go out onto Piccadilly, hardly an inviting prospect!

This is one of my favourite parts of London, but it's a missed opportunity at the moment for good Boris biking. Boris himself has called for more access for cyclists in parks, let's hope the park authorities are listening.

Next time, Hyde Park, but for now, the very first picture of a Boris bike to appear on this blog! 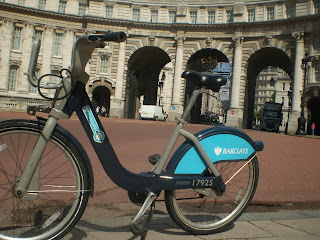 I've just been reading about Ian and Tom's Boris bike adventure in Paris. What a great advert for the bikes, and the photos are fantastic. Well done guys! Where next?

Does the City love Boris bikes?

Living and working in the City of London is a great experience, and more so since just over 12 months ago we got a whole new set of shiny blue bikes to get around on.

I thought today I'd do a little review of Boris bikes in the City; many of the issues I'm going to touch on are are just as relevant in other boroughs. And if you think you've read all this before, you probably have, there's been plenty of talk about City cycling on the Cyclists in the City blog and on the Boris bikes forum.

Yesterday the City's newest dock opened on Cheapside. Originally there was smaller dock on the other side of the road, but between then and now the road has been totally remodelled to widen the pavements, and the replacement dock has just reopened. About time you might say, Boris bike docks (like cycle parking) are in short supply around here, considering how many people visit the City for business or tourism every day. In the morning, as commuters arrive, the docks fill; in the evening, vice versa. By mid evening there are usually few bikes to be had, a pity really consdiering that later on, once the traffic has quietened down, it's a good place to cycle. Of course, there is no easy answer to remedy this. Redistribution of bikes would need to be on a huge scale, and reliable, and I doubt that's affordable. With so few people living in the City it would be hard to get any natural inflow of bikes, except brought in by tourists and commuters, who tend to arrive together in the morning. More docks we need, naturally, but the City authorities are understandably cautious about losing valuable pavement space.

But Boris bikes do have one valuable contribution to make. The City's streets are choked with traffic most days; Lower and Upper Thames Street are among the busiest and most polluted roads in London. City workers on Boris bikers are a good reminder to the City authorities that things can be different, and we don't necessarily need to prioritise motor traffic on every road. The political wheels of the City move slowly, but a 20mph speed limit is under consideration, eight new docks are due for construction in the phase 2 expansion (see a map), permeability is improving (Wood Lane has gone two-way and 17 other streets are up for consideration, Cyclists in the City reports), and a Boris bike will take centre-stage at the City Cycle Style event. As someone whose first experience of cycling in London was wobbling down Eastcheap on day 1 of the Boris bikes, I'm hopeful for a better future for cycling in the Square Mile.

This evening I took a ride to the newest docking station at Southwark tube station. Actually it's two docking stations; the one behind the station has opened already, the one directly on Blackfriars Road is nearly ready but hasn't been activated yet. I docked in the active one, up a few steps which is slightly disconcerting but entirely manageable. On a Sunday evening nothing much was going on, though I imagine there'll be plenty commuter traffic on weekdays, especially when station 2 opens. Considering south London is dreadfully served by cycle hire, it's rather odd that TfL have focused so heavily on supplying docking stations so close to Waterloo. No other mainline station has had such treatment yet. It would be interesting to know why.

Just a couple of hundred metres further north on the same road is, of course, Blackfriars Bridge. The latest skirmish in the 'Battle of Blackfriars' was last Friday evening when an LCC-organised flashride brought the bridge to a standstill. Not a few Boris bikes took part. The paradox is that these beautiful new bikes have the potential to change London into one of Europe's great cycling cities, but transport planners remain intent on prioritising motorised transport over cyclists or pedestrians. Are novice cyclists really going to pedal over the new Blackfriars bridge, with its extra lanes of traffic and increased speed limits? The battle isn't over yet, but with the new station due to open on 3 December, time is running short.

The other dock I've got my eye on is Cheapside. It's there, it's big, but it still isn't active. Watch this space.

And if you're wondering, on a Boris bikes blog, where are the pictures, my camera is currently broken. Images coming soon we hope!